BRUTE FORCZ is a kick ass heavy metal band from Los Angeles, CA.
The band was formed in 2010 after ex professional wrestlers Slammer and Jammer decided they wanted to make heavy metal music in the style of Motorhead, Judas Priest, AC/DC and W.A.S.P.The power trio began performing in Los Angeles in the Summer of 2010. They immediately gained attention and a growing fan base opening for bands such as WASP, LA Guns, Loudness, Michael Schenker Group, Joey Bella Donna (Anthrax), Y&T, Steel Panther, George Lynch and many more.They then caught the attention of legendary producers Bob Kulick and Brett Chassen.
The band recorded their debut album at Office Studios and features 10 songs that kick major ass.
Their music has received huge amounts of press and exposure online within the metal community. After spending the last few years dealing with Injuries, surgeries, bad finances,
departures, and even death, Brute Forcz is back with a new 4 song EP.
The EP is self titled, “Brute Forcz”, and features Rowan Robertson (Ex-Dio), on guitar and was
engineered and produced by legendary producer Bill Metoyer (Metal Blade A & R, Slayer to name a few)
and Skull Seven Productions.

As the band is preparing to play and have their music played across the world,
there is no doubt it will be “KICK ASS HEAVY METAL.” 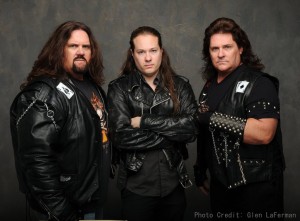