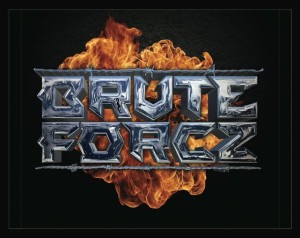 Great article on Brute Forcz and their new EP,  from Robert Williams at Metal-Rules…….

Brute Forcz
BRUTE FORCZ
April 2016
Released: 2016, Self Released
Rating: 4.0/5
Reviewer: Robert WilliamsPro-Wrestlers turned pro-rockers Brute Forcz return with their third offering in a four-song self-titled EP. Lead off track “Phat Ass Girls” is about as fast and furious a tune as we’ve heard from brothers Slammer & Jammer. The lyrics centered around hooking up with this chick that has a really fat, juicy ass. “Death Is The Devil” is a mid-tempo crusher, as Jammer sings the blues about all of his friends that have been taken away (When you’re a pro wrestler or a rocker that’s a lot, but when you’re both it could seem like too much to handle).

What should be noted in the second paragraph of this review is the absence of guitarist Will Wallner, in lieu of Will is a new guitarist named D.C. Hexx. In addition to that mystery, Rowan Robertson (DIO) is listed in the special thanks as “absolutely the best guitarist we have ever worked with” though it’s not immediately clear what kind of role he played on this new four-song EP.

“(Ain’t Gonna) Tear Me Down” has some great motivational lyrics about never giving up or letting people get the best of you cause when you get back on your feet you’re gonna kick them in the ass type of thing. This would make good entrance music for a pro-wrestler or you could play it on the stereo while you and your girlfriend have rough couch sex.

The self-titled EP comes to a close with “Nightmare Hell” a fast paced headbanger with some shredding leads, thumping bass lines and a thunderous beat. I recommend this band to all fans of heavy metal. Brute Forcz are one of the coolest bands to surface in the last ten years. Go check out their music video for “Sex Machine” you’ll see what I mean.